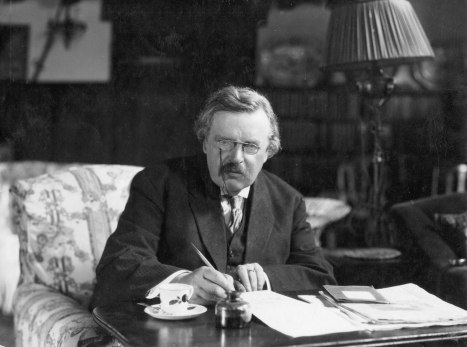 “Happiness is a state of the soul; a state in which our natures are full of the wine of an ancient youth, in which banquets last for ever, and roads lead everywhere, where all things are under the exuberant leadership of faith, hope, and charity.”

GK Chesterton
– “The Travellers in State,”

I hope everyone is doing well…just a quick post to let y’all know that I’m doing well and I haven’t given up on blogging or at least the idea that one day I can become a real blogger.

PS Happy Lent to everyone! May it be a joyful and fruitful lenten season…

In honor of our Lady of the Rosary I will like to share with all of you GK Chesterton’s poem Lepanto and for more information about the battle of Lepanto please click Beneath Thy Protection.

A few lines from Lepanto:

Today is the second year anniversary since I started the great adventure that has been Intrepid Muses. Thank you to all my new friends for their encouragement and support!

The unofficial motto for this blog can be found in the words of GK Chesterton:

Well to a few more years of trying to do a thing worth doing but end up doing it badly.

GK Chesterton pretty much summed up this election cycle Republican and Democratic primaries: 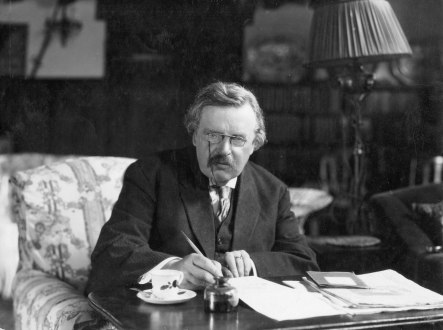 If that didn’t tease you enough here is the opening poem to  his detective novel, The Man Who Was Thursday.

The Man Who Was Thursday,  A Nightmare by GK Chesterton

A cloud was on the mind of men, and wailing went the weather,
Yea, a sick cloud upon the soul when we were boys together.
Science announced nonentity and art admired decay;
The world was old and ended: but you and I were gay;
Round us in antic order their crippled vices came —
Lust that had lost its laughter, fear that had lost its shame.
Like the white lock of Whistler, that lit our aimless gloom,
Men showed their own white feather as proudly as a plume.
Life was a fly that faded, and death a drone that stung;
The world was very old indeed when you and I were young.
They twisted even decent sin to shapes not to be named:
Men were ashamed of honour; but we were not ashamed.
Weak if we were and foolish, not thus we failed, not thus;
When that black Baal blocked the heavens he had no hymns from us
Children we were — our forts of sand were even as weak as eve,
High as they went we piled them up to break that bitter sea.
Fools as we were in motley, all jangling and absurd,
When all church bells were silent our cap and beds were heard.

Not all unhelped we held the fort, our tiny flags unfurled;
Some giants laboured in that cloud to lift it from the world.
I find again the book we found, I feel the hour that flings
Far out of fish-shaped Paumanok some cry of cleaner things;
And the Green Carnation withered, as in forest fires that pass,
Roared in the wind of all the world ten million leaves of grass;
Or sane and sweet and sudden as a bird sings in the rain —
Truth out of Tusitala spoke and pleasure out of pain.
Yea, cool and clear and sudden as a bird sings in the grey,
Dunedin to Samoa spoke, and darkness unto day.
But we were young; we lived to see God break their bitter charms.
God and the good Republic come riding back in arms:
We have seen the City of Mansoul, even as it rocked, relieved —
Blessed are they who did not see, but being blind, believed.

This is a tale of those old fears, even of those emptied hells,
And none but you shall understand the true thing that it tells —
Of what colossal gods of shame could cow men and yet crash,
Of what huge devils hid the stars, yet fell at a pistol flash.
The doubts that were so plain to chase, so dreadful to withstand —
Oh, who shall understand but you; yea, who shall understand?
The doubts that drove us through the night as we two talked amain,
And day had broken on the streets e’er it broke upon the brain.
Between us, by the peace of God, such truth can now be told;
Yea, there is strength in striking root and good in growing old.
We have found common things at last and marriage and a creed,
And I may safely write it now, and you may safely read.

In honor of GK Chesterton Birthday, here is one of my favorite quotes from the English author and convert to the Catholic Church:

“People have fallen into a foolish habit of speaking of orthodoxy as something heavy, humdrum, and safe. There never was anything so perilous or so exciting as orthodoxy. It was sanity: and to be sane is more dramatic than to be mad.”

Beneath your compassion,
We take refuge, O Mother of God:
do not despise our petitions in time of trouble:
but rescue us from dangers,
only pure, only blessed one.

Beneath Thy Protection is one of the earliest Christian prayers of our Blessed Virgin Mary. It dates to approximately the year ~250 AD a century before the Church established for the first time the canon of scripture in the Synod of Hippo in 393 AD. It was part of the Christmas liturgy celebration and it is still used in the liturgies of the Coptic, Byzantine, Armenian and Roman rites of the Church.

This very early Christian devotion to our Lady embraces the words of Christ when He said to John at the foot of the Cross:

“When Jesus saw his mother and the disciple there whom he loved, he said to his mother, “Woman, behold, your son.”

Then he said to the disciple, “Behold, your mother.” And from that hour the disciple took her into his home”.

John his beloved disciple stands right there for all of us: “Behold, your mother”, Christ gave us his mother to us; the Blessed Virgin Mary is our mama! Christians throughout the centuries have understood it clearly. That is why Beneath Thy Protection is such a beautiful intercessory prayer to our Lady. 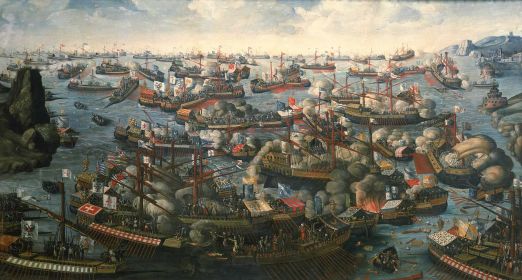 Centuries later Christians in Europe fled to the Blessed Virgin for protection against the invasion of the Muslim forces of the Ottoman Empire. The Battle of Lepanto, October 7, 1571 stand as one of those defining days in Western history. Many historians argue that a defeat of the Christian forces opposing the Muslim invasion would have been a catastrophe for Christendom in Europe, allowing the Turks to overrun most if not all of Europe.

As the Holy League, a coalition of Catholic states, including Genoa, Spain and Papal States fought the invading forces many cities throughout Europe prayed the Holy Rosary asking for the intersection of the Blessed Virgin Mary to her Son. It is easy to imagine people gather in Churches chanting in Latin:

We fly to thy protection,
O Holy Mother of God;
despise not our petitions
in our necessities,
but deliver us always
from all dangers,
O glorious and blessed Virgin.
Amen.

At the end of the five hour battle only about 210 Ottoman ships were destroyed compared to about 60 from the Christian fleet. The battle signified the last great maritime battle fought with galleys and a major victory against Islamic invading forces. As the result, Pope Pius V instituted October 7 as the feast day of Our Lady of the Rosary.

Blessed Virgin Mary intercede for us!

For my thoughts on Islamic persecution of  Christians persecution in the Middle East click here. 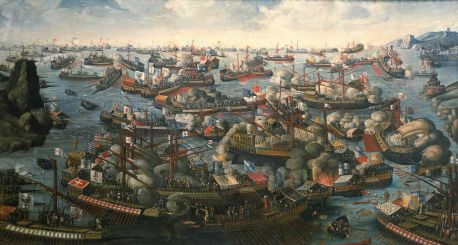 Naval Battle of Lepanto 1571: A battle for the heart of Europe against the invading Ottoman Empire fleet. It was fought by the Holy League, a coalition of southern European Catholic states led by Don John of Austria.

Put down your feet upon him, that our peace be on the earth.”
For he heard drums groaning and he heard guns jar,
(Don John of Austria is going to the war.)
Sudden and still–hurrah!
Bolt from Iberia!
Don John of Austria
Is gone by Alcalar.

It seems that in the very short time that I have been blogging, that I quoted GK Chesterton in every other post. Well, I decided not to quote him on this post but rather quote someone talking about quoting Chesterton:

“Stop quoting Chesterton is like stop eating potatoes chips…you just can’t do it”.