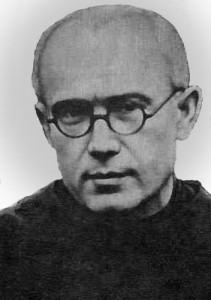 “The most deadly poison of our time is indifference.”

It was a summer day and the camp prisoners were standing in front of their Nazi guards in disbelief against such inhuman cruelty. They all stood until the last of ten prisoners was chosen to suffer death by starvation. No barbarian is content with the blood they wanted more. They want it to teach a lesson to those who would try to escape.

The sentence was pronounced and like a piercing thunder aloud cried erupted from one of the condemned:

“O my poor wife, my poor children. I shall never see them again.”

At that moment, a flood of mercy rushed into his Heart, all his life was for this moment. As a child, he asked the Virgin Mary what would be of him. She responded by showing him two crowns, one white and the other one red. She tenderly asked him if he was willing to accept either one of them. The white one meant that he should persevere in purity and the red one that he should become a martyr. He chose both.

Long time later, that child now barely resembling a grown human being due to the scourge of hard labor and inhuman mistreatment slowly walk to the prison guards and said:

“My name is Maximillian Kolby”.

“I am a polish catholic priest and I want to take this man place.”

Prisoner 16670 said calmly as he offered his life for the family man. What thoughts must have passed through the SS officer? Could such act of love have broken through his soul and lifted the clouds of darkness?

They tried to take their humanity away, but instead fervently and loud prayers; hymns and the rosary met their inhumanity. The starvation bunkers were not longer and instruments of death, but one of redemption. In imitation of Christ, they turned those starvation bunkers from a sign of despair and extreme human cruelty into a sign of Faith, Hope and Charity. They turn their cross into an instrument of love.

St. Maximillian Kolby pray for us!

This was a fictionalized re-creation of what happen based on witness account. To learn more about this great saint please visit: